Alhydran following irradiation of oncology (and other) patients 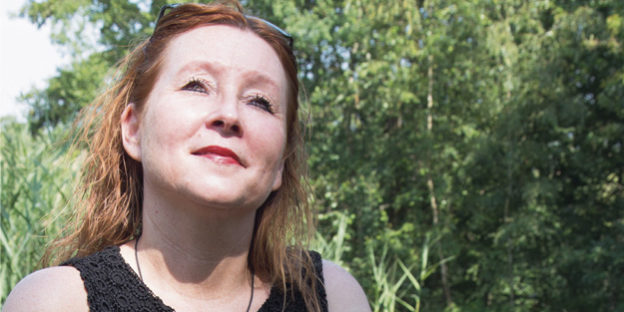 It was 2011. Yvonne Kok Driessen was 39 years old, had a successful job as a marketing and magazine manager, a happy marriage and two beautiful children of 7 and 8 years old. Suddenly she was confronted with breast cancer, type 3. The tumour was 5.4 cm in size, with metastases to the lymph nodes of her right armpit. The prospects were not exactly rosy…

How did you react to this news?

‘Your world collapses completely. Not only for me, but also (and maybe especially) for my children and husband. What followed was a difficult period of great uncertainty, with heavy treatments. First 1.5 years of complete degradation to destroy all the cancer cells. Then, after two months of rest, another six months of chemo. Then a big operation, followed by about 17 irradiation sessions, spread over five weeks. And eventually hormone pills, which is, I suppose, further chemotherapy. I was supposed to take those for five years, but I had so many side effects that after about six months I quit, in consultation with the specialist.

I received treatment at the Catherina Hospital in Eindhoven. Oncologist Yvonne Y.E.A. van Riet was great support to me there. Thanks to her and the other specialists I can now – eight years later, at the age of 47 – tell you all about it.’

What role did ALHYDRAN play in your treatment?

‘Irradiation can cause many skin complaints, as the doctors told me: dry, red skin and a lot of itching, among other things. And even scars. The hospital therefore advised me to use ALHYDRAN cream before the treatments. I got a sample free of charge. At first, as always, I was sceptical. But I soon noticed how easy it was to apply, how quickly it was absorbed and how it really added to the recovery of my skin. It’s conveniently packaged, in tubes, so I could easily take it with me to the hospital.

Using ALHYDRAN was good, precautionary advice – and prevention is always better than cure. I’ve never had any skin complaints caused by irradiation. So the cream was certainly not an unnecessary luxury! What’s so good about ALHYDRAN are its excellent, high-quality, organic ingredients [see box, ed.]. It’s a very natural product, with no chemical stuff in it.’

The ingredients of ALHYDRAN:

What did ALHYDRAN ultimately mean to you?

‘I took the cream with me to the hospital and applied it to my skin immediately after each irradiation treatment, before getting dressed. And it worked. My skin recovered amazingly quickly. No burns or ugly scars. Even the elasticity of my skin was preserved. My skin’s just been flawless. This is amazing, especially for a redhead with white, sensitive skin. And it didn’t get in the way of the irradiation (which is what the doctors were a bit worried about). Because I’m now talking about eight years ago. Apart from the side-effects of the chemo and the operation (the removal of the lymph nodes), I’ve been declared cancer-free. So yes, ALHYDRAN has certainly been of enormous added value in my case – in protecting my skin during the irradiation sessions. You lose so much to a disease like this. I’m extremely happy that my skin has been spared.’

Would you recommend ALHDYRAN to fellow sufferers?

‘Yes, for sure. That’s what I’m doing in this interview. Thanks to ALHYDRAN cream, my skin has remained beautiful. So beautiful, in fact, that with the oedema therapy (which I still have, because of removal of my lymph nodes) I’m often mentioned as an astonishingly good example! Several specialists actually couldn’t believe it.’

Quote:
‘I’m amazed at how beautiful my skin stayed.’

ALHYDRAN is available from pharmacies, (skin) therapists, clinics and hospitals. And online.